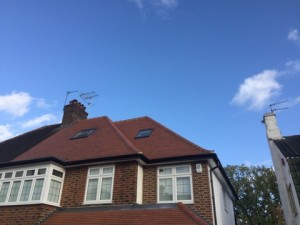 New roofs, replacing missing tiles, stop leaks caused by roof TBS are the contractors for you! The new roof to left was a project TBS have just completed in Woodside Park. Carefully finished but also within a very fast time frame. TBS are also in the process of erecting a new roof in Finchley and replacing a number of missing tiles of a house in Hendon.

One of our recent clients had a major leak coming from his ceiling which two roof contractors said was not caused by the roof however TBS noticed what the issue was with the roof and had the leak fixed within a couple of hours!! The client said he would not use any one else other than TBS moving forward!